I'm very happy to introduce you to one of my favorite musicians and producers, Brad Stanfield. I first met Brad when I played at the House of Blues Los Angeles back in 1999. We, along with Jason Brock and Periel Marr, were in a band called the Freedom People for a very magical period from 2004 to 2006. We will be releasing some of our mystical recordings from Kevin's house as Freedom People in the next couple of months. 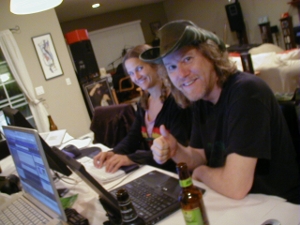 Brad has been here in San Diego since late Thursday night and we are having a blast! We're nearly finished with creating his TuneTrack website and new release Wizard (he is giving away AWESOME source tracks to his GreenClub!!). For a limited period time, my GreenClub members can get his album, source tracks and GreenClub membership for only $4.20 (now you can't get that at iTunes!). I'm certain you will love his work as much as I do! We are headed to the ocean for a quick, refreshing dip...then onto recording the tracks "The Noose", "Rise" and "Alabaster Dove"!!!! GreenClub members just might get early versions if you let me know you want them! Peace! ~Emily