PRESS RELEASE: Emily Richards Offers Free Download of 'You Give'

Sep 09, 2009 – Emily Richards has just announced she will be offering her entire hit-album 'You Give' as a free download for fans (in full CD-quality), along with the record's album art, liner notes, lyrics, and other extras at TuneTrack.net on 9/9/09. A new interactive music player at TuneTrack.net allows fans to experience 'You Give' as they would the physical CD, with uninterrupted streaming while 'flipping' through 19 pages of album art and also perusing liner notes, credits and lyrics. You Give' is the second of Emily's 11 albums and was the most popular pop/rock album on MP3.com from 1998-2000. 'You Give' includes hit singles 'To Love You', 'Do You Remember', and 'Lie to Me', all written by Ms. Richards. 'To Love You' has been downloaded by more than 1 million listeners alone. 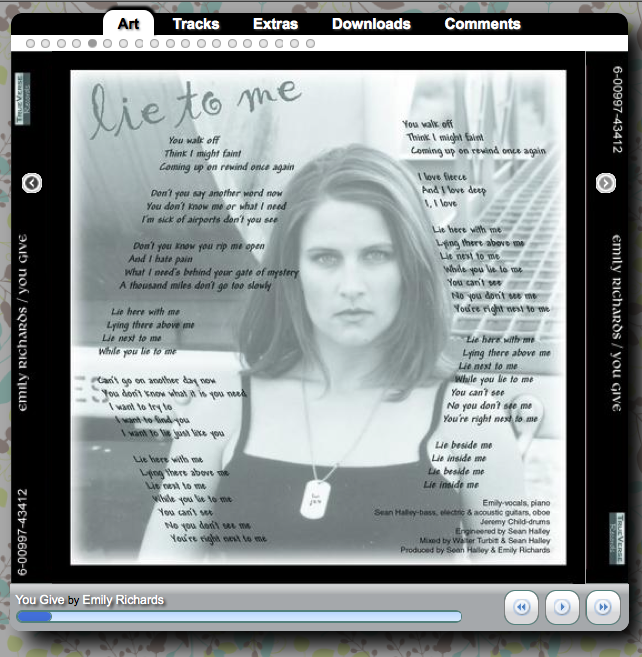 Richards offers her GreenClub and IndiClub Members the same high-quality audio and visually interactive experience with 'One or Ten', her best-of album, privately released on TuneTrack.net on 4/20/09. In addition to Emily's 10 best songs voted upon by her fans, 'One or Ten features two remixes (by Brad Stanfield and Jayson Haws) of her song 'Apologize' (about the North Pacific Gyre) from the ccMixter Earthday 2009 Remix Project. 'One or Ten's' 18 page artbook includes lyrics as well as personalized comments from Emily about the composition and recording of each song. Downloads are available in 128k, 156k, & 320k MP3, FLAC (lossless/full CD-quality) and OGG.  'One or Ten' will be available via standard iTunes release (without the extras offered through TuneTrack) in October '09.

ArtisTech Media's Co-Founder and Software Architect, Alex Goodwin, designed TuneTrack's new music player in a way that gives indie artists and their fans a more robust musical and visual experience. "We've heard iTunes and the Majors may be working on one or more new album formats that incorporate some similar elements, but they are likely to be proprietary with delayed or even outright denial of access to indie artists," stated Mr. Goodwin. iTunes does not include credits, lyrics and other liner notes provided by indie artists, and does not offer full CD-quality/lossless downloads at all.

Emily Richards is the CEO and co-founder of next-gen music label ArtisTech Media and is best known as the most downloaded indie-rock artist on MP3.com. She has self-released 11 albums and her songs have been downloaded more than 3 million times.  Ms. Richards is also the Chairman of AWAKE Community and Heal The Gyre.