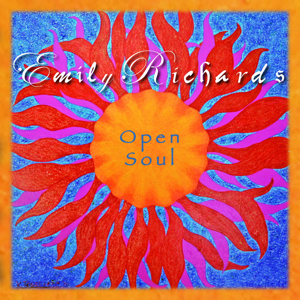 It's been longer than we want to acknowledge...Emily Richards hasn't released an album under her own name since her greatest hits One or Ten in 2009. We are pleased to announce Emily will be releasing a double album of new acoustic songs.

Although seemingly silent under her given name, Emily has been in anything but a writer's slump! Under her alias Snowflake at ccMixter, Emily has composed and recorded over 100 new tracks since 2006, all under Creative Commons licenses, facilitating the expansion of Richards' music globally through remixes, YouTube videos and mobile apps.

We convinced Emily it was time she curated a selection of her new songs to share with you in album format. Open Soul and Open Heart are two albums that share her personal and spiritual journey over the past several years.

"My songs show the deepest and most personal parts of me," commented Richards. "I'm blessed to share much of these experiences with my fellow artists at ccMixter. They have buoyed me up and helped me develop every aspect of myself. I am grateful."

Emily's first of the two albums, Open Soul, features 15 songs penned and recorded by Richards, featuring her expressive vocal and piano work. Two of the tracks feature the beautiful cello work of Wolf Sebastian. All of the tracks were mastered by producer Brad Stanfield. The original paintings and artwork for Open Soul have been graciously contributed by Ken Tesoriere.

Given the stripped-down acoustic nature of this Song Collection, listeners can hear the true depth of soul Richards possesses. Turn the lights down, light some candles and swim in the sensory of music.